“Whenever I have read any part of the Vedas, I have felt that some unearthly and unknown light illuminated me. In the great teaching of the Vedas, there is no touch of the sectarianism. It is of [all] ages, climes, and nationalities and is the royal road for the attainment of the Great Knowledge. When I am at it, I feel that I am under the spangled heavens of a summer night.” Henry David Thoreau

One of my herb harvests became a herb maṇḍala! View more on my Flora Mandala page.

We have certainly had some “spangled heavens” this summer, with warm summer nights, clear skied full moons, and an extraordinary meteor shower. Did you see it? Here in our woodsy home, surrounded by tall firs, we only managed to catch a few ‘shooting stars’.

Though most the summer has been warm and lovely, it’s also been challenging for me due to an infected tick bite, followed by several weeks of antibiotics, causing other problems, more drugs, yada, yada, yada. Tired, achy and hot on the 90+ degree days (those same sky-view-limiting trees like to hold in heat!), my muse was looking for a creative, calm distraction from bodily woes. 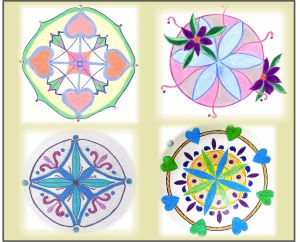 a few of my little color doodle designs

Ten years ago, sick with what was diagnosed as idiopathic gastroparesis (I wonder about that word “idiopathic”, does it come from idiot? Is it when doctors don’t know what the heck is going on and feel like idiots?), I started drawing mandala-type designs I called ‘color doodles’. The color and geometric foundation of my ‘doodles’ was calming, centering, and focused my mind away from constant nausea and pain. There was something soothing and healing in each little design as I concentrated on drawing it. For about 3 months I drew one design after another and the little drawings became transformational for me.

Geometric form has helped people order and calm their minds, homes and communities probably since people learned to draw forms. Geometric designs and architecture are found in all the great civilizations, from the Incas of South America to Egypt, ancient China, and the Indus Valley culture of India, with which I am most familiar.

Our tiny Vastu building has in common with all Vastu buildings a cupola which corresponds with the open space below, the Brahma center. The center of a mandala is also often called Brahma.

Vastu Shastra, (also spelled Vaastu and sometimes called Vastu Vidya) the ancient architectural principles of India designed to bring harmony to buildings, like many Vedic teachings, was lost as a science and art for centuries because many ancient texts were destroyed or misinterpreted by people and cultures who invaded, dominated, and suppressed the Indus Valley culture. But ancient buildings, both residential and temples, built according to those Vedic principles were not destroyed and through the efforts of Ganaparti Sthapati, who was an architect, sculptor, and teacher, there has been a revival in India of Vastu architecture. We were fortunate 11 years ago to find a young American architect who studied with Ganaparti. He drew up plans for a small Vastu building, designed for us based on the land and our Vedic astrologic charts. Though only a ‘mini’ example of Vastu Shastra, it is a lovely building and folks comment on the ‘energy’ of the building. (You can read more about Michael Borden, Vastu architect, and look at pictures of gorgeous homes built according to Vastu principles here: Vastu Design.) 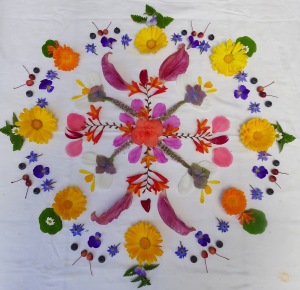 a variety of flowers and berries make up this little mandala.

When the ancient rishis, or sages, wrote the Vedic texts Thoreau refers to above, they wrote about Ayurveda, Vedic (Jyotish)astrology, Yoga, and Vastu. They understood the energy fields of the material world, including the earth and everything on it. The existence of those energy fields has been confirmed by modern science. The rishis understood the importance of working in harmony with those energies for health and well being, including the magnetic fields of the earth and cosmos. The rishis understood the magnetic fields of the earth to be laid out in a grid pattern. That grid pattern is a theme repeated in a Vedic astrology chart, in the architectural plans for a building build according to Vastu principles, and the patterns of mandalas and yantras, intricate patterns created for the purpose of calming and interiorizing the mind. The energy grids are the foundation of the sacred geometry found throughout Nature.

A ‘floating’ mandala on a hot day of calendula, borage, feverfew, mint, rose and other flowers. You can see in each flower a mini-mandala!

Consciously or unconsciously, people have always sought to reproduce and harmonize with these grid patterns in architect, art and the lay out of towns and cities. Examples can be found in stain glass windows found in the great cathedrals of Europe that have similar patterns to the mandalas of Hindu culture and yantras of Buddhism, or the patterns found in ancient Aztec and Mayan art and architecture, best known being Sun Calendars, or Sun Stones. 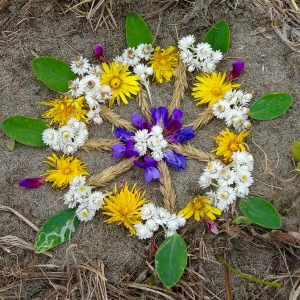 a little botanical maṇḍala I made at Grayland Beach of the flowers found among the dune grass.

When my muse began to make botanical mandalas this summer, I realized the theme of geometric design has repeated itself in my life, often at times when I needed an outer expression of creative harmony. Our little Vastu building, my color doodles, labyrinths I draw in the sand at beaches, and now mandalas made of herbs and flowers, all have this theme of symmetry and geometric pattern. It is human nature to be attracted to these grid-like patterns as a way of finding harmony in chaos. We all seek that harmony. The symmetry brings balance, the creation process brings calming focus. I encourage you to try working with the harmonious geometric patterns of energy and Nature in whatever way you find to be creative.

another floral mandala in Nature! Part of the beauty of flowers is their harmonious forms.

I find the process of actually creating geometric designs most beneficial, but there are oodles of coloring books of mandalas and some of yantras available.  At the very least, notice the spirals and grid patterns found around you in Nature, from a conch shell or snail’s shell to the interior of a flower.  It is not difficult to find energetic harmony in Nature, even when there appears to be such in-harmony around us.

Nature creates beautiful harmonious mandala grid patterns everywhere, as in the center of this poppy.

Wikipedia has a very informative page about mandalas in art and architecture, with scrumptious pictures! Mandala